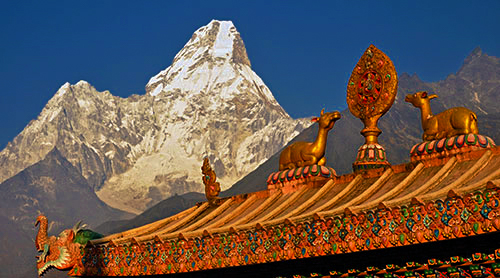 Days 22
From US$ 2,159
Next Departure -
Grade
Check Availability 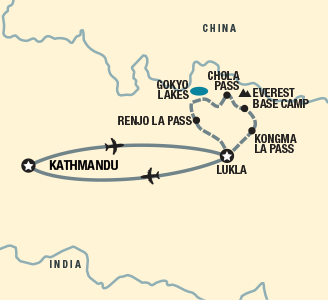 The Everest Three Pass trek is considered to be one of the most difficult yet the most adventurous of all treks in Nepal. The trek takes us over three passes of the Everest region. The three passes are the Kongma La (5535 m), Cho La (5380 m) and Renjo La (5388 m). Most areas are equipped with lodges, but there are places where tent encampment is required. While some parts of the trek are fairly easy along good trails, some portions are challenging and potentially dangerous. There have been instances where people have had to quit their journey of the Everest three pass treks, due to rushed ascent and altitude sickness.

Keeping all of the above-mentioned facts in mind, it is also to be noted that the itinerary we have created, gives adequate time for proper acclimatization and is safe to follow. The Everest Three Pass trek offers wonderful photographic views of the mountains of the Everest Region and the mighty Everest itself. The passages through the High Passes are exhausting yet filled with pride and pleasure.

The Everest Three Pass trek is a chance to tread upon the footprints of the mountaineers of the mighty Everest. The rugged and remote paths, untouched by the realms of urbanization and industrialization take you as close to nature as is possible. Filled with adventure and thrill, this one in a million trekking trail is highly recommended for thrill seekers with an attitude of following their dreams to intermingle with the wild nature.

Are these trips physically demanding?

Everest regions are the primary approach route to the highest peak on earth, Mt. Everest. A land of extremes, Everest is home to varying landscapes, most of it being demanding regarding trekking. While the views of the loftiest peaks all around make trips exciting, it should be noted that one has to keep in mind the adverse effects of Altitude Mountain Sickness. Trips to the Everest Base Camp trek with Gokyo are not recommended for children and old people. To tread the path between the rocky terrains, one must have some prior walking experience and good stamina. Read the physical rating of each trip in order to determine if the trip is meant for you.