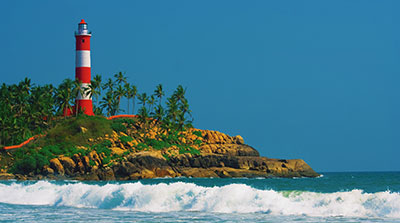 Days 6
From US$
Next Departure -
Grade
Check Availability 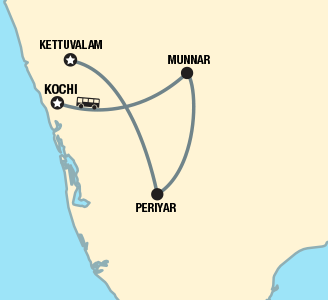 Kerala is aptly called the God’s own country, as it is wedged between the Western Ghats on the East and the Arabian Sea on the west. Kerala was called Keralam historically and is bordered by Karnataka to the north, Tamil Nadu to the east and south and Lakshadweep Sea to the west. Kerala has established itself as a destination for thrill seekers all around the world. The timeless beauty of palm-fringed exotic beaches, serene backwaters, pristine silky lands and natural beauty, Kerala truly lives to the description of being God’s own country. Kerala was covered by the sea according to mythology and was reclaimed by the axe-wielding warrior sage Parasurama.

From the majesty of Munnar and Vagamon, the serenity of Kovalam and Varkala beaches, the pristine backwaters of Kumarakom and Kuttanad, the wildlife-rich forests of Thekkady and the captivating sights of the sunset and sunrise, Kerala showcases fun and serenity in every step. Explore the beauty of Kochi, Munnar, Thekkady, Kanyakumari and Kovalam in the exquisite journey to God’s own country, Kerala.