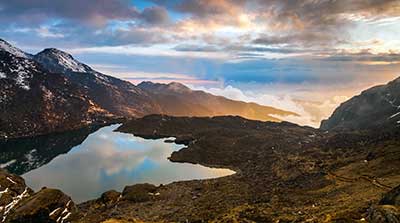 Days 13
From US$
Next Departure -
Grade
Check Availability 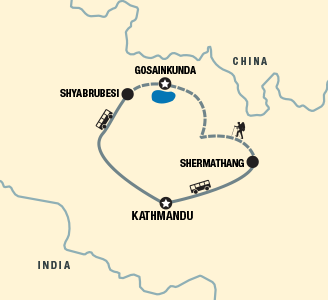 The Langtang Region of Nepal has been regarded to be one of the most natural areas in Nepal, untouched by the waves of modernization and urbanization. Though it is situated near the capital, the Langtang region and its inhabitants have managed to uphold the age-old grace and natural beauty of the region, without letting it be ruined by modern day needs. The Gosainkunda trek is one such trek, taking us deep within the mystical Langtang valley to explore its raw, rugged nature.

Along the roaring Bhote Koshi, the trek to Gosainkunda is an adventure worth embarking upon. The trails when clear, offers the views of the exquisite looking snow-capped peaks of the Helambu region. Langtang Lirung, Dorje Lakpa, Shishapangma and other Tibetan peaks offer a welcome sight and ease away the pain in the aching muscles during the trek.

The opportunity to mix in with the ethnic inhabitants of the Langtang region is in itself a glorious experience not to be missed. The trail takes us through Tibetan and Buddhist influenced regions, inhabited mostly by ethnic tribes. Exploring the religious affinity and the cultural variations of people residing in the region is another experience worth exploring.

The major attraction of the Gosainkunda Trek, as the name suggests, is the Gosainkunda. Gosainkunda is a Hindu pilgrimage site visited by thousands of internal tourists. 108 more associated lakes surround the Gosakinda Lake, which is frozen for half a year during winter.  The views from this region are worth capturing. The tough trek is suitable to be carried out by trekkers with little or no previous experience too. The itinerary is designed in a way that makes it possible for the body to adapt with the changing altitudes.

The wilderness and the raw natural beauty put forward by the Gosainkunda trek welcomes trekkers of all kinds. Explore this paradise of mystical natural beauty and you are surely set to come back for more.

Is this trip physically demanding?

The Gosainkunda & helambu trek is one of the most sought-after treks in the Annapurna region and is considered a moderate one. It is required that you have a good hiking experience before embarking on the journey. The trek passes through different types of terrains, and the roads change quite often. Muddy road, rock steps, and steep ascents and descents are extremely common. It is crucial that you know how to place your footing in the most precipitous of areas, prone to loose rocks and transverse with creeks. As altitude gains, the trek becomes harder. It is recommended hence that you give resting as much importance as walking.  There are risks associated with Altitude Sickness one your cross the 3000m mark. However, with proper acclimatization, you can complete the trip with almost no altitude sickness at all.