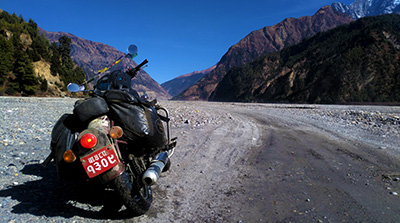 Days 13
From US$
Next Departure -
Grade
Check Availability

With innumerable types of terrain and exquisite mountain scenery, Nepal has emerged as a go-to destination for bikers all around the world. The opportunity to roam around the nooks and crannies of Nepal and its dirt roads is a perfect experience. The Nepal Experience, a ride to Lower Mustang, makes sure that you experience the ride through dirt roads in Nepal, in the duration of a few days.

With exciting biking opportunities waiting at every corner, motorcyclist enthusiasts visit Nepal each year, to explore the vibrant cultures, ancient monasteries, and the views of the perfect, sky-high white peaks peeking out from every corner. The Lower Mustang bike ride is an opportunity to explore it all, in a short duration of 12 days.

Explore the architectural diversity of Kathmandu, and embark on a bike ride to the beautiful city of Lakes, Pokhara. Ride to Tatopani, and traverse your way through the rural countryside to reach the exotic location of Muktinath. Explore the pilgrimage site and end the bike riding experience by traversing through Kalopani, to Pokhara.  Also included is the one in a million opportunity to explore wild flora and fauna in Chitwan. Test your immaculate driving skills, and take part in this perfectly formulated itinerary to explore the unrivaled wilderness, pristine scenery and warm inhabitants.