THE MONSOON MADNESS ON ROYAL ENFIELD 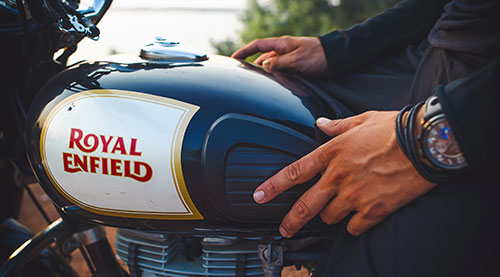 Days 11
From US$ 2,000
Next Departure -
Grade
Check Availability

Explore the richest country in terms of biodiversity on a biking trip over the Royal Enfield bike. Nepal is where the confluence of the ice-cold snowy mountains with the lush tropical Terai plains takes place. The monsoon madness on Royal Enfield is a perfect experience, taking you to the depths of this exclusively gifted country. Explore the diversity of this country on a motorbiking tour that lets you explore the nooks and crannies of this Nepal.  The extremely beautiful landscapes and rocky terrains make this bike trip on Royal Enfield on an experience to remember for a lifetime.

The Royal Enfield is a bike with a different class altogether, ranging from its performance to the way it looks. Explore the magnificent looking mountainous peaks, the vibrant cultures, monasteries and ancient temples over the classy Royal Enfield. The varying climatic conditions ranging from subtropical to Arctic can be experienced on The Monsoon Madness tour on Royal Enfield. If you are someone who loves riding a bike, and if you are ready to explore the beautiful country with diversity in terms of flora, fauna, and topography, then this tour is for you.